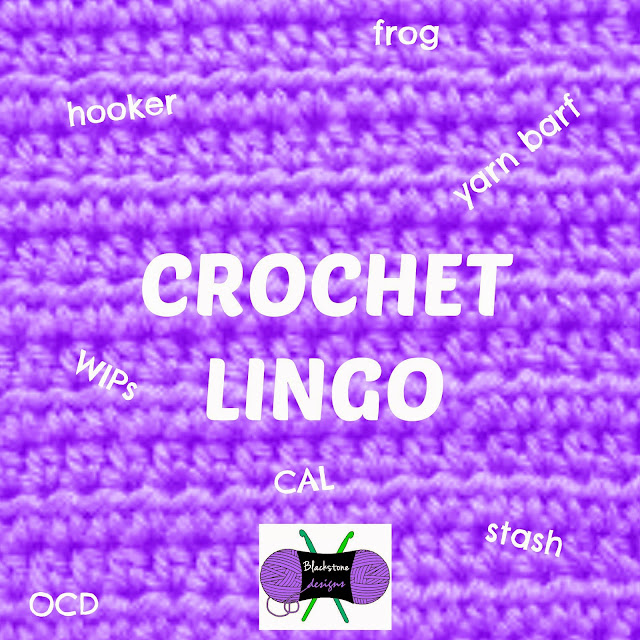 Ever wonder what someone means when they say "I had to Frog-it" or ever wonder why a t-shirt that says "WIPs and Chains excite me" is totally hilarious and not just inappropriate public wear? Well this post is going to explain some of the most popular slang lingo used among crocheters.

HOOKER: Crocheters call themselves hookers because we use hooks to crochet with. And it totally makes people cock their heads when they see things like "proud hooker" or a business name such as "The Chunky Hooker" because we associate the word with a whole different profession. Who advertises that stuff?! lol

BROCHETER: A man that crochets. Because replacing the beginning of words with bro is the thing to do (i.e. Bromance is a close male friendship). Some of my favorite designers are men btw!

CROJO: Crochet Mojo, that which drives your OCD

STASH:  Sometimes referred to as Special Treasures All Secretly Hidden. The yarn you own is your stash. Every time you buy a new skein/ball/hank/cake you are adding to your stash, unless of course, you don't put it away and you use it immediately. Some people have to hide this stash to avoid judgement, I'm lucky enough to have an enabler, so I get to display all of my pretties!

DESTASH: This is when you get rid of some of the yarn you own. Some people destash and donate it, some people hold destash sales. I often destash my discontinued yarns because it's hard to use it as a designer.

HOARDER: Someone who buys yarn just to add it to their stash and likely will never use it.

YARNIVORE: Someone that uses a lot of yarn.

YARNAHOLIC: Someone addicted to yarn.

SABLE: Stash Acquisition Beyond Life Expectancy, you will never be able to use all the yarn you own!

PABLE: Pattern Acquisition Beyond Life Expectancy. You have a lot of patterns and not enough time in your life to make them all.

WIPs: Work in Progress also known as UFO (unfinished objects). These are projects you're working on or are only partially done with. Or maybe you have your PHD? Projects Half Done.

HOTH: Hot off the Hook also called FOTH (fresh of the hook)/JOTH (just off the hook). This is a project you have literally just finished. You have just finished that last stitch!

FROG/FROGGING: When you rip out your stitches because you made a mistake. Rip it sounds like Ribbit and therefore you have a frog!

TOAD: Trashed Object Abandoned in Disgust...I have had a couple projects hit the trash can, but for the most part, the way I "trash" them is to just frog it and put the yarn back in the stash.

TALC: Take Along Crochet, these are the projects you take on the road with you...and hopefully do not work on while you drive...but totally cool if you work on them while someone else drives!

BI-STITCHUAL: Someone that both crochets and knits. You could also be referred to as a BI-CRAFTUAL, which is someone who does several crafts.

YARN BARF/VOMIT:  When you attempt to use a yarn ball like it's a skein and pull the yarn from the middle, you will likely find a big tangled mess, this is known as Yarn Barf or Yarn Vomit because it literally looks like the yarn ball got sick! This can sometimes happen with a skein too.

YARN CAKE: The "balls" of yarn you get when you wind it up on a yarn winder. Some lines are sold as cakes also.

YARN BOMB: When you take your fiber arts to the streets and cover public property in crocheted or knitted items.

LYS: Local Yarn Store, this is the mom & pop type yarn or craft store. You would typically get the less common yarns here or locally made and would not find big brands like Red Heart or Lion Brand...and be careful about asking for the big name brands in a LYS because they tend to look at you like you don't belong!

YARN SNOB: Someone who turns their nose up at big name yarns and will only use expensive lines or handspun...usually found at an LYS. (Haha...so not kidding!)


STITCH N' BITCH: When a group of crocheters (or knitters) get together and bitch while they stitch...of course it can be full of fun and laughter too!

STITCH N' PITCH: When a group of crocheters (or knitters) get together and crochet or knit at a baseball game, usually a major league game.

CAL: Crochet-a-long, it's when a bunch of hookers work on the same project at the same time, step by step.

FREEHAND: When you make something without following a pattern.

I hope you enjoyed this post! Let me know if I left anything out!

Join my Blackstone Designs Crochet Community group on Facebook to stay up to date, receive special offers, pattern support, and so much more!